Transhumanism (abbreviated as H+ or h+) is an international philosophical movement that advocates for the transformation of the human condition by developing and making widely available sophisticated technologies to greatly enhance human intellect and physiology.[1][2]

Transhumanist thinkers study the potential benefits and dangers of emerging technologies that could overcome fundamental human limitations as well as the ethical[3] limitations of using such technologies.[4] The most common transhumanist thesis is that human beings may eventually be able to transform themselves into different beings with abilities so greatly expanded from the current condition as to merit the label of posthuman beings.[2]

The contemporary meaning of the term “transhumanism” was foreshadowed by one of the first professors of futurology, FM-2030, who taught “new concepts of the human” at The New School in the 1960s, when he began to identify people who adopt technologies, lifestyles and worldviews “transitional” to posthumanity as “transhuman“.[5] The assertion would lay the intellectual groundwork for the British philosopher Max More to begin articulating the principles of transhumanism as a futurist philosophy in 1990, and organizing in California an intelligentsia that has since grown into the worldwide transhumanist movement.[5][6][7]

Influenced by seminal works of science fiction, the transhumanist vision of a transformed future humanity has attracted many supporters and detractors from a wide range of perspectives, including philosophy and religion.[5]

In 2017, Penn State University Press in cooperation with Stefan Lorenz Sorgner and James Hughes (sociologist) established the “Journal of Posthuman Studies”[8] which is the first Academic journal explicitly dedicated to the posthuman which has the goal of clarifying the notions of posthumanism as well as transhumanism as well as comparing and contrasting both cultural movement.

According to Nick Bostrom, transcendentalist impulses have been expressed at least as far back as the quest for immortality in the Epic of Gilgamesh, as well as in historical quests for the Fountain of Youth, the Elixir of Life, and other efforts to stave off aging and death.[2]

In his first edition of Political Justice (1793), William Godwin included arguments favoring the possibility of “earthly immortality” (what would now be called physical immortality). Godwin explored the themes of life extension and immortality in his gothic novel St. Leon, which became popular (and notorious) at the time of its publication in 1799, but is now mostly forgotten. St. Leon may have provided inspiration for his daughter Mary Shelley‘s novel Frankenstein.[9]

There is debate about whether the philosophy of Friedrich Nietzsche can be considered an influence on transhumanism, despite its exaltation of the “Übermensch” (overman or superman), due to its emphasis on self-actualization rather than technological transformation.[2][10][11][12] The transhumanist philosophies of Max More and Stefan Lorenz Sorgner have been influenced strongly by Nietzschean thinking.[10] By way of contrast, The Transhumanist Declaration[13] “…advocates the well-being of all sentience (whether in artificial intellects, humans, posthumans, or non-human animals)”.

The late 19th to early 20th century movement known as Russian cosmism also incorporated some ideas which later developed into the core of the transhumanist movement in particular by early protagonist Russian philosopher N.F. Fyodorov.[14] 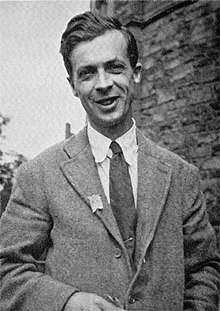 Julian Huxley, the biologist who popularised the term transhumanism in an influential 1957 essay.

Fundamental ideas of transhumanism were first advanced in 1923 by the British geneticist J. B. S. Haldane in his essay Daedalus: Science and the Future, which predicted that great benefits would come from the application of advanced sciences to human biology—and that every such advance would first appear to someone as blasphemy or perversion, “indecent and unnatural”.[citation needed] In particular, he was interested in the development of the science of eugenics, ectogenesis (creating and sustaining life in an artificial environment), and the application of genetics to improve human characteristics, such as health and intelligence.

His article inspired academic and popular interest. J. D. Bernal, a crystallographer at Cambridge, wrote The World, the Flesh and the Devil in 1929, in which he speculated on the prospects of space colonization and radical changes to human bodies and intelligence through bionic implants and cognitive enhancement.[15] These ideas have been common transhumanist themes ever since.[2]

The biologist Julian Huxley is generally regarded as the founder of transhumanism after using the term for the title of an influential 1957 article. The term itself, however, derives from an earlier 1940 paper by the Canadian philosopher W. D. Lighthall.[16] Huxley describes transhumanism in these terms:

Up till now human life has generally been, as Hobbes described it, ‘nasty, brutish and short’; the great majority of human beings (if they have not already died young) have been afflicted with misery… we can justifiably hold the belief that these lands of possibility exist, and that the present limitations and miserable frustrations of our existence could be in large measure surmounted… The human species can, if it wishes, transcend itself—not just sporadically, an individual here in one way, an individual there in another way, but in its entirety, as humanity.[17]

Huxley’s definition differs, albeit not substantially, from the one commonly in use since the 1980s. The ideas raised by these thinkers were explored in the science fiction of the 1960s, notably in Arthur C. Clarke‘s 2001: A Space Odyssey, in which an alien artifact grants transcendent power to its wielder.[18]

Japanese Metabolist architects produced a manifesto in 1960 which outlined goals to “encourage active metabolic development of our society”[19] through design and technology. In the Material and Man section of the manifesto, Noboru Kawazoe suggests that:

After several decades, with the rapid progress of communication technology, every one will have a “brain wave receiver” in his ear, which conveys directly and exactly what other people think about him and vice versa. What I think will be known by all the people. There is no more individual consciousness, only the will of mankind as a whole.[20]

Artificial intelligence and the technological singularity

The concept of the technological singularity, or the ultra-rapid advent of superhuman intelligence, was first proposed by the British cryptologist I. J. Good in 1965:

Computer scientist Marvin Minsky wrote on relationships between human and artificial intelligence beginning in the 1960s.[22] Over the succeeding decades, this field continued to generate influential thinkers such as Hans Moravec and Raymond Kurzweil, who oscillated between the technical arena and futuristic speculations in the transhumanist vein.[23][24] The coalescence of an identifiable transhumanist movement began in the last decades of the 20th century. In 1966, FM-2030 (formerly F. M. Esfandiary), a futurist who taught “new concepts of the human” at The New School, in New York City, began to identify people who adopt technologies, lifestyles and world views transitional to posthumanity as “transhuman“.[25] In 1972, Robert Ettinger, whose 1964 Prospect of Immortality[26] founded the cryonics movement, contributed to the conceptualization of “transhumanity” with his 1972 Man into Superman.[27] FM-2030 published the Upwingers Manifesto in 1973.[28]

The first self-described transhumanists met formally in the early 1980s at the University of California, Los Angeles, which became the main center of transhumanist thought. Here, FM-2030 lectured on his “Third Way” futurist ideology.[29] At the EZTV Media venue, frequented by transhumanists and other futurists, Natasha Vita-More presented Breaking Away, her 1980 experimental film with the theme of humans breaking away from their biological limitations and the Earth’s gravity as they head into space.[30][31] FM-2030 and Vita-More soon began holding gatherings for transhumanists in Los Angeles, which included students from FM-2030’s courses and audiences from Vita-More’s artistic productions. In 1982, Vita-More authored the Transhumanist Arts Statement[32] and, six years later, produced the cable TV show TransCentury Update on transhumanity, a program which reached over 100,000 viewers.

In 1986, Eric Drexler published Engines of Creation: The Coming Era of Nanotechnology,[33] which discussed the prospects for nanotechnology and molecular assemblers, and founded the Foresight Institute. As the first non-profit organization to research, advocate for, and perform cryonics, the Southern California offices of the Alcor Life Extension Foundation became a center for futurists. In 1988, the first issue of Extropy Magazine was published by Max More and Tom Morrow. In 1990, More, a strategic philosopher, created his own particular transhumanist doctrine, which took the form of the Principles of Extropy, and laid the foundation of modern transhumanism by giving it a new definition:[34]

Transhumanism is a class of philosophies that seek to guide us towards a posthuman condition. Transhumanism shares many elements of humanism, including a respect for reason and science, a commitment to progress, and a valuing of human (or transhuman) existence in this life. […] Transhumanism differs from humanism in recognizing and anticipating the radical alterations in the nature and possibilities of our lives resulting from various sciences and technologies […].

In 1992, More and Morrow founded the Extropy Institute, a catalyst for networking futurists and brainstorming new memeplexes by organizing a series of conferences and, more importantly, providing a mailing list, which exposed many to transhumanist views for the first time during the rise of cyberculture and the cyberdelic counterculture. In 1998, philosophers Nick Bostrom and David Pearce founded the World Transhumanist Association (WTA), an international non-governmental organization working toward the recognition of transhumanism as a legitimate subject of scientific inquiry and public policy.[35] In 2002, the WTA modified and adopted The Transhumanist Declaration.[13] The Transhumanist FAQ, prepared by the WTA (later Humanity+), gave two formal definitions for transhumanism:[36]

In possible contrast with other transhumanist organizations, WTA officials considered that social forces could undermine their futurist visions and needed to be addressed.[5] A particular concern is the equal access to human enhancement technologies across classes and borders.[37] In 2006, a political struggle within the transhumanist movement between the libertarian right and the liberal left resulted in a more centre-leftward positioning of the WTA under its former executive director James Hughes.[37][38] In 2006, the board of directors of the Extropy Institute ceased operations of the organization, stating that its mission was “essentially completed”.[39] This left the World Transhumanist Association as the leading international transhumanist organization. In 2008, as part of a rebranding effort, the WTA changed its name to “Humanity+“.[40] In 2012, the transhumanist Longevity Party had been initiated as an international union of people who promote the development of scientific and technological means to significant life extension, that for now has more than 30 national organisations throughout the world.[41][42]

The first transhumanist elected member of a Parliament has been Giuseppe Vatinno, in Italy.[45]